Conductor Jonathan about his experiences:

“It was in 2007, when I first went to Tanzania and Kenia. I was lucky to be able to spend a few days with a Maasai Tribe, north of the border between Kenia and Tanzania, near the Loitokitok border crossing.

Upon my arrival in the traditional village, the first thing that struck me, was the distance the children took from me, being the first white man they ever saw in their lives. It took them about an hour to get closer to me, and even touch my blond hair, which was still long at that time. 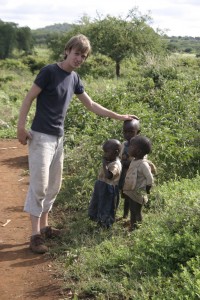 The Maasai are living in the most rural areas of the dry plaines in Tanzania in Kenia. There, were the animals try to survive in extreme drought, the Maasai move from one place to another, with their cattles of goats and cows. During my trip I joined the women on their journey to get water; an one our trip with a donkey, down to a river that almost dried out, with brown water flowing through it. I also had the pleasure to go on a ‘medicintour’ with the local medicin man. He explained me the use of all kind of different vegetation, of which the leaves, roots or trunk would be used to cure all deseases man have to deal with; from simple headaches and stomach pains, to viagra and a special tea to protect their cattle and themselves against predators in the area (mostly lions).

The Maasai are easy to spot. Not only do they wear bright and extraordinary clothes, they also seem more tall and strong then most of the other tribes in the area. Usually Maasai only get married within their tribe, which also make them different. A bride is traded for cows and goats, and rich men can be found with several wives.

The men and women have their own schedule during a day. The young boys and older men take care of the cattle, the women take care of the children and the ‘household’. Then there are the Morans, young boys, who protect the family. Traditionally, young boys were sent into the wilderness and had to bring back a lions tale, in order to finish their ritual of becoming a true Moran.

The Maasai culture has a rich musical influence. There are many songs and dances for many events. Harvestsongs, weddingsongs, warsongs, hauntingsongs etc.

On my search for traditional Maasai music, I stumbled upon the great work of Impossible Music, a great record label that went into the Maasai culture, and recorded several songs with traditional choirs.”

An expert and friend about Maasai choirs on his website:

“Mark suggested we get in touch with Hezron Abel, a Maasai elder whose choir has been winning competitions in Tanzanian since forever. They sing Maasai songs, but in Swahili so they can reach a broader audience. Tracking Hezron down was an exercise in itself.  We started in his village, followed the trail to Heifer International, and finally found him somewhere upstairs and down the hall in the Lutheran Diocese administration building in Arusha.

Hezron understood right away what we were trying to do: record great Maasai singers singing their haunting songs.  Over the next few weeks, we drove all over the slopes of Mt. Meru looking for a choir.  Lead after lead was a dead end.  We heard of choirs and found they didn’t exist.  In a wired together shock-less Toyota wagon with Metilli, Hezron’s brother-in-law, at the wheel, we raced up and down so-called dirt roads with bushes and banana trees on either side scraping the dust off.  As we uncharacteristically crossed ourselves in the back seat, we crashed through backyards and scattered chickens, all the while with Metilli yelling that we didn’t need seat-belts because he was in Divinity School. 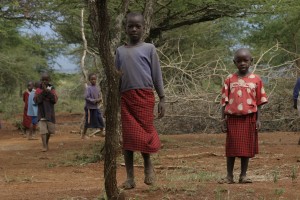 Hezron and Metilli were patient with us.  After several trips into the wilds, they convinced us that maybe we didn’t want a bush sound, anyway.  Why not listen to Hezron’s people, the Loruvani Choir? We did and the rest is as you guessed. It’s Maasai magic.

When we were in town and able to record, the entire choir of usually more than twenty piled into one Toyota van and came to sing.  They’re the most professional group with which we’ve ever worked. None are paid. They’re all volunteers and they’re tight. Maasai ordinarily, at the same time they’re singing, make wild vocalizations. They pop. They click. They yelp and trill. We’d never heard anything like it. One fellow’s groan sounded like a barn falling over. When we replayed our first recordings in the editing suite, we thought we had a defective machine. Too many pops and clicks.

In some songs, Maasai bend the notes, for lack of a better term. When we first heard this in editing, we thought our recorder had a variable speed motor.

We got all that worked out. As I said, the Loruvani people are professional. With a little explanation about recording, they were off and running again. You’ll hear the results.”